Before I dive in... The wrestling community loves to talk about how great wrestling skills are for football players. We're not wrong either. In fact, in my experience, wrestlers tend to dominate in other sports as compared to their peers despite not always having the same size or experience. Football, Cross Country, Lacrosse, Track & Field, etc all have tons of examples were talented wrestlers stand out.

But we approach this issue the wrong way most of the time. We want other sports to send their athletes to us with an obscure promise that they will get better at their sports... I mean it's a "win-win", right? Except those coaches are doing all the upfront work. Here's an infographic that is often shoved down football coaches throats...

Again, not wrong. It's just the wrong approach. Here's something I shared on my Facebook page:
"Coaches:
If you have 25 guys on your wrestling team and yet you complain that you can't get football players to come out for the team... Send your 25 guys to play football in the fall. Problem solved in a big way.

Wrestling and football are the perfect marriage, but it's a two way street. Relationships are a give and take. Let's start giving to football in a big way. Invest in that relationship."

My point... Let's start giving first, then asking. Instead of asking and then promising an "I owe you". You will find that football is actually very good for our wrestlers.

Ten Good Reasons Wrestlers Should Play Football
1. Teamwork-You must work with ten other players to overcome the other team and properly execute a play.
2. Reduced Risk of Burnout-Taking a break from one sport to play another is the best way to prevent burnout without losing the competitive edge.
3. Building Friendships-With so many players on one team, football provides student-athletes the opportunity to form social bonds with like minded people. The social side of sports is undervalued. (This becomes a recruiting tool... Kids want to do what they're friends are doing!)
4. Explosive Movements-Football players explode off the ball every play. They get a decent recovery time between each play allowing the athlete to develop their explosiveness in an environment unmatched in sports. (Wrestlers use explosive movements in matches, but rarely get a break before the next movement. Recovery is key when training explosive movements)
5. Bone Strength-Between the strength training programs and the physical contact in the sport, football players develop strong bones when combined with proper nutrition. Leading to a decreased risk of injury. (Football is a safe sport with safer rules, techniques, and equipment developing at a rate faster than any other sport)
6. Coordination-Football requires a wide variety of coordination and balance in each position. Hand eye coordination, low center of gravity, foot work, twisting, turning, pivoting. (Coordination is huge in wrestling too!)
7. Discipline-Football, similar to wrestling, requires a lot of discipline. Blocking assignments, route running, avoiding penalties, everyone has a specific job and the team is depending on you. (Discipline is discipline is s discipline. Wrestling teaches great discipline, but learning it and developing it another sport translates very well and is more likely to transfer into real life)
8. Overall Athleticism-Strength, speed, agility, explosiveness, twisting, turning, timing, and coordination... Football provides the complete package.
9. Cognitive Development-Football is not only great for the ways it is similar to wrestling but also the ways in which it is different. Using the similar movements in a new environment coupled with the different movements present in the game are great for the cognitive development of the athlete as well as their overall creativity.
10. Fun Loving Attitude-Football is a fun game, football players love having fun while playing it, and that attitude is something wrestling sorely needs. Additionally, these are kids. They should be out having fun and the opportunity to play football isn't there forever. 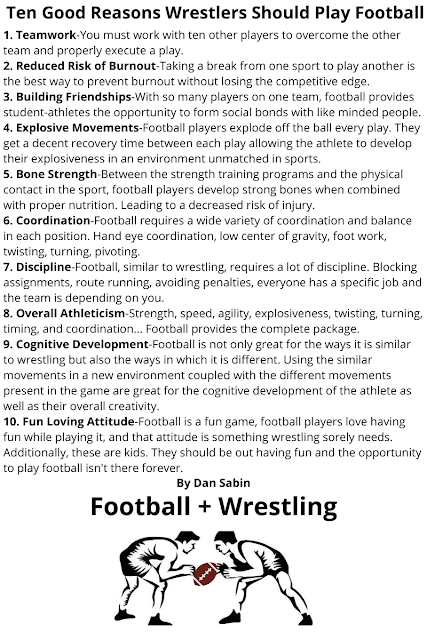 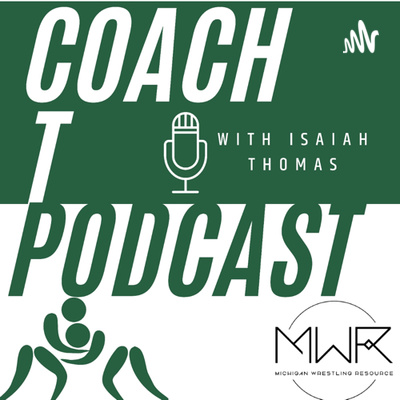 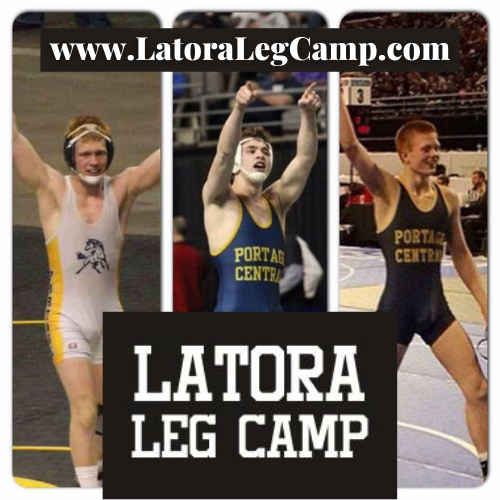